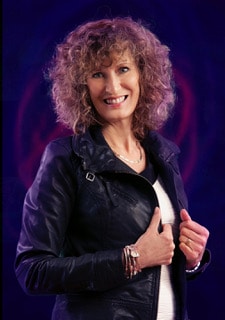 Adrienne studied singing, oboe and piano at the Royal Scottish Academy of Music and Drama before joining Scottish Opera for a year as a chorus member. She further trained as a music specialist in primary and secondary education and began her teaching career in Dunblane High School. During her early performing career, she made many appearances with local choirs performing oratorio and concerts. She was then invited to sing for Radio Scotland and began touring with Jimmy Shand, which she admits was an education in itself!

She moved to Wiltshire and eventually became Director of Performing Arts in the Junior department at the Royal High School, Bath and met her now husband, Paul, who is a rock musician. She lives in the beautiful village of Steeple Ashton, just beside Salisbury Plain and performs at least twice a month with either a function band, a Rolling Stones tribute band, a swing band or a very successful duo which is herself and Paul.

She gave up  class teaching nine years ago to focus on the art of teaching singing and thoroughly enjoys it. She teaches at King Edward’s School in Bath and has many private students of all ages. She also conducts an adult rock choir called Steeple Rocks that has around 80 members: she arranges all the music and records all the parts.

She became a member of AOTOS in 2014 and joined the council in July 2018 as the South West Area Representative: she is looking forward to meeting more members, welcoming new ones and organising events.