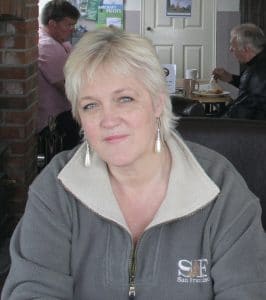 Mezzo soprano Janet Shell is a qualified teacher and was a Head of Music in Buckinghamshire for five years before retraining as a professional singer at Guildhall School of Music Drama, studying with William McAlpine and Laura Sarti. On leaving Guildhall, she won several song competitions including prizes for French song in Paris, and was the first mezzo soprano to be taken on by YCAT. Over the years she worked for Kent Opera, Opera d’Aix en Provence, Lyon Opera, ENO, WNO, Opera North and ROH; however, it is for her oratorio and recital singing that she is best known. She was the first singer ever to sing live on Classic FM and has broadcast live several times and with Radio 2 on Friday Night is Music Night for the BBC. She continues to perform and is an advocate of learning about the changing voice, particularly after she suffered vocal cord haemorrhaging which needed corrective surgery. For that reason, she is a strong advocate of likening vocal health issues to sports injuries, which do not suffer the same long-term prejudices in the continuation of a career.

She has taught singing for over 25 years in several schools and in her private practice in Hersham. She currently teaches at Reading University on the BA teacher training course and at St Paul’s Girls’ School, and has recently been appointed as a singing teacher at Eton College. Her interest is in helping develop independent learners and singers, giving them the confidence to use their voices technically well for whatever genre they work in. Her students engage with both classical and music theatre singing exams and she has recently enjoyed music festival adjudications.

Her passion for both education and healthy voice use led her to set up Talking Voice in 2007: she travels nationwide to deliver lectures and workshop sessions to trainee teachers on voice care and becoming a presence in the classroom, marrying her knowledge in both the teaching and singing professions. She self -published Talking Teachers (lulu publishing) in 2016 as a guide for teachers on voice use and is looking forward to working with AOTOS on the council as a way of opening up discussions around voice and teaching and finding positive and helpful ways to talk about the diversity within voice teaching.

Away from singing and teaching, Janet loves champagne and food and is a keen family ancestry researcher.