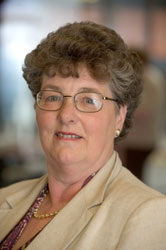 Margaret Hopes began singing as a child in her native Yorkshire. She continued to do so throughout her formative years at Weston-super-Mare Grammar School for Girls and at Newton Park College, Bath. She studied singing with Richard Graves and Mollie Petrie, but particularly with the late Marjorie Avis. It was under Marjorie’s guidance that she gained her ARCM Performer’s Diploma. She has a wide repertoire as a recitalist and oratorio soloist and has played roles in a diverse range of shows including Dido and Aeneas, Kiss of the Spiderwoman, Showboat, Follies, South Pacific, Princess Ida, The Mikado, The Grand Duke, Merrie England and Titanic the Musical.

Sharing her skills and knowledge with children and young people has always been important to her. She has been music co-ordinator in primary schools in Weston and Bristol. She was also music consultant for the South-West region of the Guide Association which involved leading singing groups for a variety of occasions . This gave her a repertoire which is most useful in her present career.

She was assistant musical director of Cantamus, a chamber choir founded and directed by her husband, Philip, and  is president of Weston Choral Society. She continues to perform regularly in Somerset and Bristol and teaches privately and for North Somerset Music Service.

She was introduced to the work of AOTOS by Marjorie Avis and served as the Association’s General Secretary from 2008 to 2017.