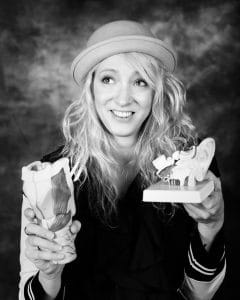 Carrie has been an active performer in ballet and musical theatre from a young age, initially performing in amateur drama and dance showcases across Lancashire. As a young musician she has also served in the Lancashire Music Service Woodwind and Jazz Orchestra's, playing flute and alto saxophone, which led her on to keyboard, guitar and songwriting. She now fronts alternative-grunge-rock band Figures, who have been broadcast by BBC Introducing numerous times since 2015, gigging regularly at alternative events and festivals across the UK.

In 2009 she graduated with a BA (Hons) in Popular Music and Drama Theatre Studies from Liverpool Hope University and has since trained as a ‘Popular Vocals Teacher’ via the London College of Music. She currently stands as a Popular Vocals Lecturer at the Leeds Conservatoire, alongside running her own private studio Pro Vox in Liverpool, specialising in CCM vocal training and artist development. She recently completed her Master of Arts in the Applied Practice of Vocal Pedagogy (The University of Wales, Trinity Saint David via Voice Workshop Ltd.), and recently began her PhD research at the School of Music, University of Leeds focusing on 'Auditory Processing of the Singing Voice'. Alongside teaching and research Carrie also serves as a singing specialist volunteer with the NHS ENT Voice Clinic at the Royal Liverpool and Broadgreen Hospital Trust and is involved with the NEW voice care educator; Vocal Health Education as of 2020.

Carrie has been a member of AOTOS since 2014 and in that time has seen the amazing community and network of voice and singing specialists growing. She is eager to learn and share with other specialists and assist in the bringing together of teachers and voice users in the North. She joined the AOTOS council as North Area Representative in July 2017, and hopes to assist with the continuation of professional advice, care and training to active voice users, teachers and performers.