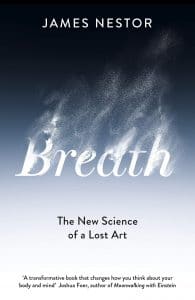 It was random: I clicked on a link to a podcast where James Nestor was speaking about his latest book ‘Breath’ and 20 minutes in I was hooked. So much so, I ordered the book in hardback and it arrived a couple of days later.
The subtitle is ‘The New Science of a Lost Art’ and from the opening words I found it a very easy if slightly uncomfortable read.

Uncomfortable because as I read further into the book, I was conscious of my own breathing, trying to match the optimum breath for a calm and healthy stable state body which turns out to be 5.5 seconds in and the same out.

What I will say is that this man took himself on a wild journey of discovery about breathing that involved him becoming engaged at many different levels and going through experiments that will make your hairs stand on end. Not least is the one where he (and a friend) willingly let leading Otolaryngologist at Stanford, Dr. Jayakar Nayak, plug the nose with silicone plugs so they can only breathe through the mouth for ten days before reversing the experiment and taping the mouth so that only nose breathing can occur. Needless to say, the ability to breathe through our nose is crucial for our health and later in the book, James is convinced that we can all learn to do this, even if we traditionally have trauma in this arena. He makes a convincing argument.

The book is a mix of his own story, the experiments he undertakes, and his reflective journey through all this. He interviews various breathing specialists: from trained deep-sea divers, to a choir conductor who claims that using the diaphragm to exhale stale air can cure respiratory disease, to yoga, to somebody who suffers ‘empty nose’ syndrome – something of a misnomer as the sensation is quite the opposite, i.e. sensing always having clogged up nasal passages despite them being perfectly clear. It can occur after nasal surgery and its symptoms include dizziness, gasping for air and at its worst, a sense of drowning, leaving the person in a constant state of panic.

He talks with Dr Marianna Evans, a dental researcher who has spent years looking at the mouths of human skulls both ancient and modern. She shows that in ancient times humans had much wider airways, leading to better aligned teeth, which aided our breathing. However, as our brain grew, it needed more space and so the face shortened and the mouth shrank leaving us with a smaller nose through which to breathe in and filter air. Our adaptation came at a cost.

Inevitably, Nestor looks at various spiritual systems that use the slowing of breath to bring about a mesmeric trance-like state, and I suppose with equal inevitability I was left with the sense of this book being partly about his own spiritual search. Nevertheless, alongside all this he also checks out athletes and sports mavericks who are experimenting with alternative breathing techniques.

In many ways, all you have to do is switch on your computer and all this research is already ‘out there’ just waiting to be found. For me there was a missed opportunity by not asking what professional singers know about breathing and managing airflow: what happens when we attach sound to air. I feel there is a missing chapter on the understanding that so many of us singers continue to reveal.

Ultimately, what we are buying into here is his personal route map, and his writing is very accessible: it flows well and it does parcel a lot into one place so is none the worse for that. Personally, I found it thought-provoking and stimulating. The Appendix brings together many exercises from all different disciplines to try out, including an explanation of why nasal humming is so good for us. It is all to do with nitric oxide which increases oxygenation, widens capillaries, and relaxes smooth muscles. By humming we increase the levels of nitric oxide up to 15 times and benefit ourselves hugely in turn.
I suspect that on re-reading, I might come to the conclusion that really the whole book is about making sure you breathe through your nose and not your mouth. Amen!

You can find out more about James Nestor on his website www.mrjamesnestor.com 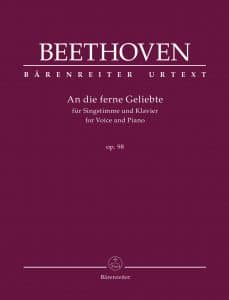 Bärenreither have recently published a new Urtext edition of Beethoven’s Lieder cycle An die ferne Geliebte (To the distant beloved), edited by Barry Cooper. This collection of six songs, performed without a break between songs, is often considered the first song cycle, though as the editor points out, none of its structural features were new. As one of the mainstays of the Lieder repertoire, a considered and scholarly new edition is certainly welcome. The print is clear and typesetting avoids the sterile appearance of many modern editions. As one would expect in a publication in this series, there is a thorough introduction which discusses the context in which the work was composed, talks about the research questions and makes an appraisal of performance practice. The editorial aims – to create an accurate text and to explain the meaning of notational uncertainties – seem to be amply fulfilled. At the back of the edition the editor has provided a reference to the sources used and a detailed listing of all the editorial questions raised. As a singer who performed these songs on numerous occasions, I found the discussions compelling. The editor has also provided English translations which are at once easy to read, but faithful to the German text, though no word for word translation is provided.

The collection has always been popular with male Lieder singers. The songs are attractive and accessible for both performer and audience.

Though simple and strophic, and making no great technical demands on the singer, the songs are nonetheless are very poignant, offering a wonderful vehicle for a tender and heartfelt performance, demanding artistry that belies their simplicity. Many have wondered if Beethoven had anyone in mind when he wrote the songs.

Just a few years earlier, in 1812, he wrote a passionate love letter to a woman known as his Immortal Beloved, whose identity is disputed, and the parallels are certainly compelling – requited love, but a relationship that cannot be fulfilled. Barry Cooper discusses the unusual care the Beethoven took in the publication process. It is clear this collection was dear to the composer.

This new edition certainly offers a performer the clearest and most authoritative reading of the musical text yet. The question that surprised me most was why the score is only published in the one key – the original key, for tenor. This certainly limits the market for the edition. The editor provides some tantalising thoughts as to why the songs should not be transposed, and it is clear that, in his view, transposition is inappropriate He even suggests that the range would still be manageable by a high baritone, which I would contest – manageable perhaps, but unappealing. This has actually made me look into the matter transposition. To understand the argument, one has to look into tuning and temperament. Like many, I had grown up being taught that Bach championed even temperament – so that transposition of material written after this was not a problem. I realise now that the evolution of temperament was much more complex than that suggests, and that Beethoven was not writing for what we understand to be even tempered tuning. Transposition would certainly have changed the feel of the songs. Does that mean they were never transposed? Was Beethoven less of a pragmatist than Schubert, writing his great song cycles just a decade later and surely writing for the same pianos? Schubert wrote his great cycles for tenors, but his music was championed by the baritone Vogl, with his blessing. Furthermore, these days tuning to anything other than even temperament is a specialist area. Realistically most modern performances are done on modern instruments with modern tuning. Whilst I now understand Barry Cooper’s reasoning, I feel that most singers will simply use alternative editions if they need to – I can only hope they at least compare their editions with this one to benefit from his undoubted scholarship.