– an interactive day introducing this technique, with new ways of listening and tools for working with singers 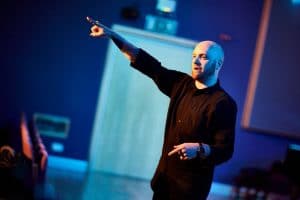 Primal Sound is not a new concept in singing technique. First described by Oren Brown and then cemented into classical vocal pedagogy by Janice Chapman, Primal Sounds have been used to capitalise on the human body’s emotionally motivated reflexes in breathing and support.

In 2006 Dane Chalfin and the voice clinic team at Wythenshawe began investigating the primal gestures in the larynx and pharynx with a focus on contemporary singing styles. After looking at over 400 singers endoscopically, Dane developed a model for using Primal Sound in contemporary singing pedagogy that marries both the body’s emotive reflexes in breathing and support with gesture in the larynx and vocal tract. The result is a jargon-free way of working with the voice that joins lyric and musical interpretation with an evidence-based approach to physiology.

This interactive day aims to give teachers an introduction to working with Primal Voice including new ways of listening to voices and tools for working with singers that keep technique and interpretation working together harmoniously.

Dane Chalfin is a singing teacher and vocal rehabilitation coach working in both NHS and private practice in London and Manchester. His ongoing research (2006-17) with University Hospital South Manchester into the endoscopic assessment of disordered singers and the laryngopharyngeal gestures of singing and primal sounds now has over 400 subjects and may be the largest study into the singing voice to date.  He also contributed to the development of an endoscopic protocol for the assessment of singers in the voice clinic (Jones, Chalfin, Garrett 2006-17).

He is a past president (2015-16) and director of the British Voice Association. He is currently a vocal advisor to the Medical Committee of the British Association of Performing Arts Medicine (BAPAM) where he pioneered the creation of competencies for Vocal Rehabilitation Coaches working in multidisciplinary voice clinics in the UK. He has previously held the Associate Professorship of Vocal Coaching and Rehabilitation at Leeds College of Music, where he was also Principal Lecturer of Artistry and Performance (2007-17). Other academic posts include teaching fellow in Pop Voice at Liverpool Institute for Performing Arts (2003-6), Senior Lecturer in Pop Voice at the Royal Northern College of Music (2008-10), and Lecturer in Voice at University of Salford (2001-03).

Publications include TC-Helicon’s Ultimate Guide to Singing (2016), and Bloomsbury’s The Singer-Songwriter Handbook (2017). Clients include major recording artists, West End productions of Wind in the Willows, Rock of Ages, Sunny Afternoon, and Motown; and national tours of Jesus Christ Superstar, Wicked, The Producers, Shout!, and many others.